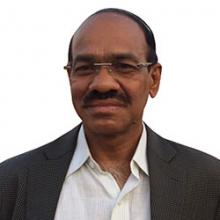 Shri Bharat Chandra Pradhan Graduated in Civil Engineering with Honors from University College of Engineering (UCE), Burla, Odisha (Now VSSUT) in the year 1980. After his graduation, he joined as Assistant Engineer under Works Department, Government of Odisha in the year 1981. During his incumbency as Assistant Engineer, he served in different capacity till 1997.During the year 1994 he completed his Master in Technology in Transportation Engineering from UCE, Burla. He was promoted to the rank of Assistant Executive Engineer in the year 1997& worked up to end of 1999 and promoted to the rank of Executive Engineer& worked till 2003, thereafter promoted to the rank of Superintending Engineer and worked till 2005. He got promoted to the rank of Chief Engineer during September, 2005 and worked as Chief Engineer, National Highways, Government of Odisha and stayed there for a long period of about 8 years till 2013, thereafter worked as Chief Engineer(Roads), PWD and Chief Engineer, PMGSY(RWD) till mid-October 2017 and promoted to the rank of Engineer-In- Chief(RWD) and retired from services on 31st January 2018. During his tenure as Chief Engineer, N.H. he changed the scenario of all the NHs of the State which were very much in deplorable condition. During his period as Chief Engineer, (DPI& Roads) due to his personal effort he drove many important schemes to fast track. Some of the schemes are implementation of State Highway Development Programme (SHDP) a mega scheme of the State to upgrade all the SHs to two lanes through EPC mode, construction of long pending Gurupriya Bridge in the district of Malkangiri, major bridges over Mahanadi near Sambalpur, bridge over IB in the Back Water of Hirakud Reservoir etc. (All are under EPC mode and in challenging site conditions). He was instrumental in fast tracking the progress of the 1stkind of BOT projects of the State “Sambalpur-Rourkela 4 laning project of 187km at a cost of Rs1400crs which was subsequently completed in time. During his tenure as CE, PMGSY his performance was extraordinary. Due to his effective monitoring the State become an outstanding performer in implementation of PMGSY scheme and awarded with different prizes from MoRD, Government of India in the year 2016-17, 2017-18 and subsequent year also. Shri Pradhan has exposure and vast experience in the Highways/ Rural Roads and bridge sector.

Since August 2018, Shri Pradhan is working in the National Rural Infrastructure Development Agency as Consultant, Director(Technical). In the present capacity he is responsible for all the matters relating to technical issues which includes planning and scrutiny of proposals of the States for sanction under PMGSY, framing of technical specifications and guidelines etc. Besides this, he is looking after implementation and monitoring of PMGSY works funded under World Bank.

Shri Pradhan is an active life member of Indian Road Congress since 1980, he was an elected council member for three consecutive terms including nominated member several times. He was vice President of IRC for the year 2016-17. Shri Pradhan likes to do most of the domestic works himself, at his leisure and often watches social movies. Besides he along with his spouse are very much fond of visiting different tourist places.