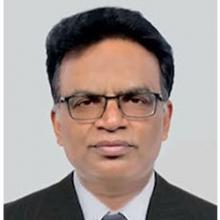 Shri Pradeep Agrawal is an IDSE( Indian Defence Service of Engineers) officer of 1988 batch, He is BE Civil, M Tech Construction Technology and Management, MBA in Operations Management, MCIarb( UK), a qualified International Arbitrator with specialization in Construction Projects. He is an expert in contract negotiations and dispute resolution/ mitigation, trained by University of Michigan.

Before joining NRIDA on deputation in June 2019, he was entrusted with the responsibility of Project planning and implementation of all Army infra works in north eastern sector under Ministry of Defence and was placed at Shillong. He has more than 33 years of professional experience in several Govt positions. He was an expert member of Dispute Resolution Board of all Army Infrastructure works in North East. During his professional career, he has successfully delivered several projects of Army, Air force, Navy which included several strategic infrastructure including Air Bases/ runways , underground buildings , maintenance/ facility management of big cantonments . He has varied experience of working in different parts of the country in project planning, designing, contracting, execution including a prestigious tenure in policy formulation and implementation at HQ MES and technical vigilance of infrastructure works of entire Northern region of Armed forces. Besides several recognitions, he has been awarded with prestigious Chief of Army Staff commendation, given for exemplary dedication and bringing a positive change in the organization.

Sh Agrawal , in his previous deputation assignment as Head of Infra in NATRIP (under Ministry of Heavy Industries), is credited with successful revival of a multidisciplinary infra project of national importance ,enabling India’s auto sector to be in league with developed nations in terms of homologation and R&D capabilities in the industry. He is credited with development of India’s biggest project in Auto Sector and one of the best in world , developing green field/ brown field projects across 7 centres in India including a project at Indore spread over 4000 acres of land with high speed test tracks designed for more than 350 KM /Hr for testing vehicles from across the globe , with banking of more than 12 m height and parabolic camber of more than 42 degree , a complex project involving international bidding and consultant from across the globe and IITs.

He is a fellow of Institution of Engineers (FIE) and member of Society of Automotive Engineers (SAE),technical advisor to several technical bodies. He has been a cogent speaker in many International/ National conferences and has published numerous technical articles on several subjects including Project Management, Proving Ground/Test Track technology, Accident Data Collection & Analysis in India etc. He authored a book on “R&D Infrastructure Project Management in Auto Sector”, a treatise as an International Expert on Project Management.

In the present capacity as Director Projects at NRIDA, he is responsible for Project monitoring, implementation, evaluation, Contract Management, Maintenance Management of roads , IT related projects of Pradhan Mantri Gramin Sadaak Yojna and policy.